(PONARS Policy Memo) The unexpected results of last summer’s UK Brexit referendum significantly impacted the perception of Azerbaijanis about their country’s future cooperation with the EU. Britain is a major investor in Azerbaijan and has played the role of Baku’s EU champion. London has been the preeminent defender of Baku initiatives from within the EU, among other things advocating for the Baku-Ceyhan gas pipeline to Turkey and Europe as well as several other large projects. Britain’s energy interests in Azerbaijan have allowed Baku, in turn, to better promote its own interests to EU members and obtain pro-Azerbaijani resolutions or statements from the EU on the Nagorno-Karabakh (NK) issue. Obviously, Britain’s decision to leave the EU does not mean that Baku will stop cooperating with Brussels. However, London’s absence as a major player and supporter will make it difficult for Azerbaijan to receive the same level of EU support on a range of projects. What are the Brexit’s potential negative economic, political, and cultural repercussions on Azerbaijan over the next couple of years?

The Brexit phenomenon sent an encouraging signal for separatist movements across Europe. For instance, a new referendum on Scottish independence was initiated. Baku carefully watched the 2014 Scottish referendum, fearing that if the referendum passed it might ignite a similar chain reaction across Europe, which could very well result in the undermining of Azerbaijan’s stance about “separatism” in NK. Thus far, most European countries have not changed their policy outlook about the NK issue and continue to support principles of territorial integrity over self-determination. Nonetheless, there is unease, and as the April 2016 clashes between Azerbaijan and Armenia in NK indicate, there are hawks in the region who seek to solve the issue through military means and might try to do so again if key support for the status quo stalemate wanes.

Another issue is that the EU may decide to concentrate more on internal problems than on expanding its influence eastward. Baku and Brussels have recently been experiencing warm relations (on many issues), but skepticism by EU members regarding cooperation with non-EU members could create policy changes, such as making the Eastern Partnership Initiative (launched in 2009 and consistently ill-fated) even more problematic. A reverse view also exists, whereby Eastern Partnership countries, and Azerbaijan in particular, express skepticism about EU institutions over, for example, the EU’s inability to cope with its internal problems (migration crisis, debt issues, etc.).

It is fair to say that the number of British companies in Azerbaijan will not decrease nor will trade turnover plummet if Brexit takes place. Actually, British investments may increase to Azerbaijan if the UK loses ground in other European markets. So even though it is highly unlikely that Brexit will affect trade and economic relations with Azerbaijan, the problem is it may lead to decreasing interest from the EU, particularly in regards to the over-arching, long-standing European initiative of implementing an East-West transportation corridor. Over the past decade, Baku has invested billions of dollars into commercial infrastructure and transportation projects to position itself as a lucrative link between Central Asia, the South Caucasus, and Europe. Aware that its hydrocarbon reserves are depleting, Azerbaijan has tried to diversify its economy and be more of a multi-purpose hub, certainly with the EU as a key node.

In the region, Azerbaijan is considered a key territory for many integration projects. It is currently at the center of three major integration initiatives—the EU, the Eurasian Economic Union, and the recently-established Chinese “One Belt One Road.” Baku pinned a lot of hope on the East-West corridor as a way to amalgamate with the large EU market. At the start of August 2015, for example, the first container along the route arrived from China in record time at the newly-constructed Baku International Sea Trade Port. The container traveled more than 4,000 kilometers and reached Baku in just six days. This event signaled a new era in regional transportation links. China, Azerbaijan, and Kazakhstan were the major players implementing the project. It showed China that cargo can reach Europe much faster through the “Silk Road” route than by sea or through Russia. Both Kazakhstan and Azerbaijan sought to lure Chinese planners into using their infrastructure for the export of Chinese goods. Azerbaijani authorities estimated that by 2020 about 300,000-400,000 containers could be transported via this route—bringing in billions in profits.

However, the EU’s participation is the most important link in this equation. The share of EU countries in Azerbaijan’s foreign trade was 46.96 percent—far larger than its trade with any other partner. Currently, for Azerbaijan, 31.92 percent of imports and 59.1 percent of exports involve EU countries. For Baku, it will be extremely difficult to lobby for gas and other transportation projects going to Europe if London is absent from EU institutions.

The UK has consequential influence in Azerbaijan and in the South Caucasus in general. Besides the English language, the British education system is a major destination for Azerbaijani students. About 570 Azerbaijani students have received education or are currently studying at British universities through government-sponsored programs, and many more (hundreds) study there through other means. It is hard to anticipate how Brexit may impact this, but the expectation is that it would be more difficult for Azerbaijani students to study in the UK because they came through programs involving consortia of European universities (such as Erasmus). Brexit would halt such cooperation; it would be difficult to get funding from the EU for any joint projects involving British universities.

Perhaps the most important implication of Brexit on Azerbaijan is symbolic. For years, the trust of Azerbaijanis toward EU institutions was comparatively high and a majority of the population was willing to integrate into EU institutions. Brexit was the second biggest blow to Azerbaijan’s trust toward EU (the first was the Russian-Georgian War in 2008). Most people in Azerbaijan observing Brexit see a possible disintegration processes happening, which makes them hesitant about seeking further integration with the EU. In parallel, there is the rise of Moscow’s Eurasian Economic Union, which further decreases pro-European sentiments among Azerbaijanis, both citizens and politicians.

Despite the common perception of the negative consequences of Brexit on Azerbaijan, there are some voices arguing that there may be some positive implications. Some analysts argue that British foreign policy may become more independent from the EU, leading London to be more active in solving issues in the South Caucasus. Britain may thus play a positive and important role in resolving the NK conflict, if it decides to prioritize this. And, as mentioned, there is the chance that UK investments in Azerbaijan will increase. Still, the most important effect would be diminishing trust and belief in the EU as a model of integration and institutions worth emulating. There has already occurred a decrease in trust levels among Azerbaijanis toward EU institutions following the crisis in Greece. Brexit thus appears to be a new blow for the pro-European orientation of Azerbaijan.

If Brexit occurs, Brussels will need to increase engagement with Azerbaijan (and the region) on a range of issues, otherwise a further erosion of faith is likely. One positive sign is that in November 2016, the European Council adopted a mandate for the European Commission and the High Representative for Foreign Affairs and Security Policy to negotiate (on behalf of the EU and its member states) a comprehensive agreement with Azerbaijan. The new agreement will replace the 1996 partnership and cooperation agreement and should better account for shared EU-Azerbaijan objectives and challenges. If the EU is able to neutralize the Brexit impact swiftly—by fully engaging with Azerbaijan—then the effects of Brexit will be lessened. If Brussels vacillates, then Azerbaijan may easily fall prey to the pro-Russian Eurasian Economic Union, wiping out decades of trust built by European policymakers. 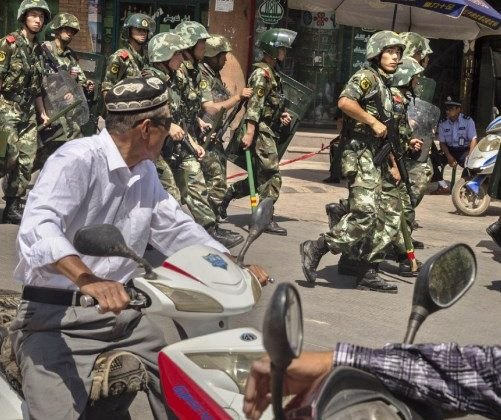 Roberts: Recent events are suggesting that the Chinese state is creating a security state within Xinjiang like never seen before