From his insistence in early 2012 on the preeminence of ethnic Russian culture in Russia to his claim in March 2014 that Moscow annexed Crimea to defend the 1.5 million ethnic Russians living there, President Vladimir Putin’s shift from civic to ethnic nationalism has been all too evident. With guards in elaborate regalia evoking Imperial Russia standing behind him, Putin’s signing of Crimea’s incorporation into Russia signaled a reliance on ethnic nationalism to expand Russia’s territory and dominance in the former Soviet space.

With this shift, to what extent is Putin risking to turn against him non-Russian ethnics, a group that makes up one-fifth of Russia’s population and is concentrated in geopolitically vulnerable areas of the Caucasus and Central Asia borderlands? To what extent might Putin’s expansionist rhetoric reanimate common memories of imperial and Soviet-era oppression among Russia’s ethnic minorities? Might Putin face especially severe backlashes in Tatarstan, home to Russia’s largest ethnic minority, given the not-so-distant history of discrimination, repression, and the horrifically murderous wholesale deportation of Crimean Tatars under Stalin? Could ethnic minorities turn into an anti-Kremlin “fifth column” of Putin’s own making?

So far these apprehensions have not materialized. According to a poll from the reputable Levada Center taken March 20-23, 2014, 88 percent of Russia’s adult population (with a sampling error of 3.4 percent) supported Crimea joining Russia. Only 6 percent of respondents opposed it. This means that most ethnic non-Russians supported Putin’s Crimea policy. In regular Levada polls, Putin’s approval rating surged from 61 percent in November 2013—when hundreds of thousands of Ukrainians publicly protested their former president’s decision to forego an association treaty with the EU—to 83 percent in May 2014, following Russia’s annexation of Crimea. At the same time, the willingness of Russians to protest against their government sank to an all-time low of 14 percent.

In Tatarstan, challenges to the Kremlin on Crimea have been mostly restricted to the separatist blogosphere (see photo). When some public protests took place in Tatarstan this past spring, they were, symptomatically, not over the predicament of Crimean Tatars but against real estate development along the Volga River that jeopardized cottage (dacha) smallholdings. In a twist, the anti-development protesters likened their allegedly corrupt local officials to the Ukrainian and U.S. governments and asked Putin to protect them—hardly a sign that the local public had lost confidence in Putin over his Ukraine policy […] 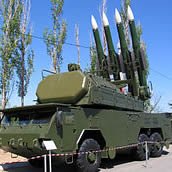 Why arming Ukraine is a bad idea