The fast-evolving Ukraine crisis has involved such high stakes and demanded so much attention from Russia’s leadership that it has become the decisive force shaping the country’s future. It has set this oversized incoherent state on a volatile trajectory heading (if in non-linear fashion) toward major disaster. Many Russian political elites understand that confrontation with the West is beyond their country’s economic might and is detrimental to its modernization. But this confrontation has become a necessary condition for the survival of the corrupt non-democratic regime that has matured under President Vladimir Putin.

The only strategy available to him for sustaining Russia’s stance and avoiding international isolation is to strengthen Russia’s ties with China. This strategy, however, is loaded with complications and risks.

Neither Trust nor Chemistry

The term “strategic partnership” is too loose a term to encapsulate the relations between Russia and China. Putin recently has even talked about a Russian “strategic partnership” with Argentina. Foreign policy analyst Bobo Lo has termed the relationship an “axis of convenience,” but Russian-Chinese security ties are not so rigid as to constitute an axis and the utility of these ties is seen in Moscow more as a last resort than a convenience.

Nonetheless, the Ukraine crisis has left a deep imprint on this insincere and deeply asymmetric relationship. Having entered into confrontation with the West, Russia has become dependent upon China’s political support. Putin long entertained the idea of upgrading Russia’s not-quite-alliance with China – but necessarily on an equal footing. Now, he has to prove Russia’s value as a special partner to China and to reciprocate for every badly-needed and reluctantly given sign of benevolence.

What makes this task especially hard is the Russian leadership’s inability to build a trust-based rapport with the Chinese leadership. For Putin, the Chinese method of leadership rotation is a nonsensical kind of self-decapitation, while for Xi Jinping, Putin probably exemplifies the unhealthy egocentrism of a self-styled “irreplaceable leader.” The Chinese leadership has every reason to see Putin’s opportunistic seizure of Crimea as a reckless land grab, uninformed by strategic vision or a sober risk assessment, which ultimately delivered him into a tight political corner offering only bad choices. That said, China did not fully spell out its disapproval, considering that Russia’s recklessness challenged international norms so blatantly it gave China space to maneuver more forcefully in its own disputed zones.

Putin’s eagerness to take a stance against U.S. “hegemonism” and to decry Western values used to be convenient for China, making it possible to avoid drawing attention to its own gradually strengthening revisionism. This was especially evident at the height of the Syrian crisis, when Moscow exposed itself to severe reproach (while taking credit for the initiative that prevented U.S.-led strikes). The Ukrainian calamity, however, took Russia’s self-aggrandizement a step too far. Putin blundered into a confrontation he has no chance of winning. Supporting a loser is not an attractive proposition for the carefully calculating Beijing.

Gas Matters, But Only So Much

The central element of Putin’s plan to upgrade relations with China is to make the latter a major customer for Russian hydrocarbons. The new gas deal signed in May 2014 was an important step toward this end, but it is by no means the breakthrough the Kremlin imagined. While the gas contract was conceptualized in Moscow primarily as a geopolitical coup, in Beijing it was discussed exclusively in business terms. For Russia, the development of greenfields in eastern Siberia is hugely important, while for China the planned production would not constitute even one percent of its total estimated primary energy consumption in 2025. Meanwhile, Turkmenistan increased its gas exports to China this year to about 25 billion cubic meters (bcm) and aims for 65 bcm by 2020, about twice the most optimistic estimates for Russia’s export volumes.

The feasibility of the deal remains a major issue, but China has no control over its implementation (unlike its deal with Turkmenistan). Gazprom will not need modern technology for this fairly traditional construction project, but the supply of pipes may become a problem, as was the case in the late 1970s. The collapse of the South Stream pipeline project across the Black Sea, which never made economic sense and has now fallen victim to the Ukraine crisis, may serve as an incentive to quickly lay down the new pipe. Still, the politicization of the project in Russia goes hand-in-hand with graft and embezzlement. Chinese entrepreneurs know how to operate in a quasi-market environment but corruption is increasingly severely prosecuted in China, while in Russia corruption constitutes a fundamental premise of Gazprom’s business culture. China Gas holds no illusions about Gazprom’s efficiency and operational costs and cannot realistically expect the first delivery of gas before 2020, far beyond the current political horizon.

The undisclosed parameters of the arrangement have been assessed in different quarters, but the main point that is often obscured is that Putin got a better deal than he had any right to expect. The bargaining had continued for more than a decade, and Putin arrived in Shanghai in the worst negotiating position he had ever been in. The escalation of the Ukraine crisis made him desperate to strike a deal with China to escape international isolation. However, Beijing refrained from exploiting that weakness to maximum effect. China Gas got Gazprom to drop its “take-or-pay” condition, but it agreed to pay an advance (as high as $25 billion) without receiving any material stake in Russian upstream projects.

By agreeing to the long-contested oil-based price formula, Chinese negotiators may have sought to secure the project’s profitability in Russia, suspecting that the deal might otherwise collapse whatever its strategic importance. To help explain China’s decision to go forward with the deal, observers also frequently cite Beijing’s desire to replace coal with natural gas in China’s energy balance. Finally, we can speculate that Beijing would in fact like to help prop up Putin’s regime; the failure of this ineffectual but irreplaceable regime could involve risks similar to those narrowly avoided in the course of the collapse of the USSR, and the lessons from that spectacular implosion are examined very carefully by the Chinese leadership.

Russia Wanders into an East Asian Sea of Troubles

The most problematic angle of the newly-strengthened quasi-alliance between Russia and China pertains to the escalation of geopolitical tensions in East Asia, in particular to the complex clashes of interests surrounding the region’s numerous maritime conflicts. It may be just a coincidence that tensions spiked in several of these conflicts at the same time as the Ukraine crisis, but China has definitely been reviving old quarrels around islets and shoals richer in symbolism than in hydrocarbons.

Russia has sought simultaneously to hold a position of absolute neutrality toward the emotional claims and counter-claims surrounding these disputed territories and to show a capacity to play its own games according to the rules of brinksmanship. It is even possible to argue that Russia has deliberately escalated its territorial dispute with Japan, centered on the three South Kuril islands (and a cluster of rocks), in order to demonstrate that it is a major party in the regional balance of forces and ready to rely on military force to protect its interests. Presently, however, both the reliability of this force and the sustainability of this neutrality are diminishing.

Up to the impromptu annexation of Crimea, Moscow had sought to preserve its freedom of maneuver and to avoid any dependency on China that could compromise this freedom. For that matter, in “strategizing” its eastward oil exports, Putin made sure that even if China were prepared to import all the oil it could carry, the East Siberia-Pacific Ocean (ESPO) pipeline would go not only to Daqing, China, but also to the Kozmino terminal on the Russian Pacific coast. Now, however, the space for maneuvering has sharply narrowed, and Rosneft will channel as much oil as it possibly can toward its Chinese customers, so that Russia to all intents and purposes will become a one-dimensional exporter to this complex regional market.

Russia’s political dependency on China is far higher than even the volume of exported and contracted hydrocarbons suggests. Beijing does not need expressions of “solidarity” from Moscow concerning its own territorial claims or actions, but it could politely suggest that Russia curtail its military cooperation with Vietnam or postpone oil and gas exploration in Vietnamese territorial waters. If so, the Kremlin would have to treat such a suggestion as an offer it can’t refuse. This subordinate position is aggravated by Russia’s growing fixation on confronting the United States (which it sees not only as a hegemon-in-decline but also as the main sponsor of “color revolutions” that it defines as a new form of warfare). Moscow tends to see every U.S. move in the Asia-Pacific as a hostile action that needs countering, but Beijing does not necessarily share such a simplistic view and has a low opinion about Russia’s capacity for engaging in such counterbalancing.

What worries Russia the most are the prospects of an assertive Chinese policy in the Arctic. Russia’s long-cherished plans to expand its internationally-recognized territorial shelf lie in shambles, while Beijing is advancing a discourse of the Arctic as a “global commons,” something that is anathema for Moscow. Having introduced newly strict rules for navigating the Northern Sea Route, Russia has launched a program to increase its military presence in the High North, focusing particularly on the eastern part of this lengthy strategic transit route. The sustainability of this effort, however, remains highly uncertain.

Conclusion: Too Close for Comfort?

Russia wants a political and economic partnership with China, but its newly rigid confrontation with the West has caused the Kremlin to rely more heavily on Beijing’s support and goodwill than it would like. The parameters of the gas deal are better than might be expected given Russia’s desperate situation, but the deal still makes little if any economic sense and consolidates its dependency.

Russia’s “pivot to the East,” initially discussed in the context of the 2012 APEC summit in Vladivostok, is a sound notion, but it requires sustained investment in the development of the Far East and a shift of political attention to Asia-Pacific matters. Presently, the Ukraine crisis has demanded a heavy concentration of Russian investment in and attention to the “Western theater,” which not only limits its “pivot” to China but also de-prioritizes it when it comes to allocating resources. Much the same way as energy export to China is conceptualized as a re-orientation from the European market (even if, in real terms, it is not), the upgrade of Russia’s “strategic partnership” with China is portrayed as a counterbalance to Western pressure and a guarantee against international isolation. In reality, it puts Russia in a vulnerable geopolitical position and exposes it to risks that it is not prepared to manage.

Despite all the superficial cordiality, Putin is not really able to connect with the Chinese leadership on a personal level and has no clue about their real intentions and motivations. This cultural gap is deepened by Russia’s inability to channel its export of corruption into this rich but particular market. The variety of semi-legal schemes that connects Putin’s elites with the European financial system and generates “friendly” lobbies of various interest groups does not work in China.

Russia’s deep-seated concerns about China’s expansionist ambitions and appetite for resources have not evaporated. They continue to interact with, rather than be replaced by, fears of NATO “encirclement” and U.S.-backed “color revolutions.” What Russian elites have to remember is that while Beijing may lend some support to the Putin regime, it will not hesitate to exploit Russia’s moment of weakness when its rotten vertical of power finally collapses. 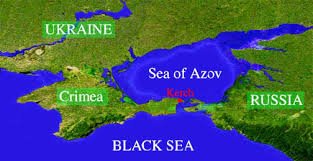 Natural Gas and the Ukraine Crisis: From Realpolitik to Network Diplomacy