(GW) Russia experts and professors at the Elliott School, Robert Orttung and Sufian Zhemukhov, discuss the aftermath of the Helsinki Summit from the U.S. and Russian perspective.

Orttung  I was following the build up to the first summit between Trump and Putin quite closely, because I was curious, as a person who has been studying Russian for twenty-five years, what exactly they would do and what would be going on there? It was particularly interesting because this is an unusual presidency and they hadn’t announced what the agenda was. There was sort of a list of all the typical issues, but it was not clear what they were going to focus on? I was quite surprised that Trump was totally unprepared for the summit. There were no clear and obvious results of their conversation. It wasn’t clear what they spoke for two hours? I was surprised that, in front of President Putin, he refused to identify with the American intelligence agencies and with what their conclusions were. To me, it was quite shocking.

Zhemukhov: I had an impression that Putin was much more prepared. He had a long list of issues that, he said, they discussed during their one-on-one meeting. I even felt that Putin overwhelmed Trump with his preparedness. Putin listed only the problems. What was striking to me was that he did not say a single positive thing about U.S.-Russian relations. Another issue that he talked about was more rhetorical. He asked Trump to talk more about terrorism and less about Russia.

Orttung: It also confirmed what a lot of people are thinking: does Russia have something on Trump? Is Trump working closely with Putin, for nefarious reasons? There was certainly nothing in this summit to disprove those conspiracy theories. That is certainly going to continue to increase the rhetoric around that kind of thinking.

Orttung: One strange thing about Trump and his administration is that they seem to be pursuing two very different Russia policies. Most people think that they would prefer to have the Secretary of Defense’s policies to the current president’s policies, but that is not the way our system works. The people elected the president and it should be the president’s policy. They’re setting a very strange precedent in this country, where the military becomes an independent actor in the political system. That is quite disturbing. It would undermine our political system. 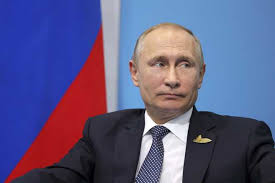 Vladimir Putin’s approval ratings are dropping. This is why.