Here are three comments on the key political surprise of this fall: the release from jail of Mikhail Khodorkovsky and his move to Germany.

Efforts behind the scenes have continued for years. The usual suspects were involved: Schröder, Steinmeyer, Westerwelle, Helmut Schmidt, plus a whole chorus of non-ideology charged experts and diplomats. The release of Khodorkowsky will smooth Russian-German relations, because the ideological campaign of the media and some politicians from the Greens and the CDU lost an important stone on the chess board of accusations. But the struggle against the Kremlin, regardless who is in power, will continue in the foreseeable future. This reflects the uncertainties of transatlantic relations. The nomination of Steinmeyer as German Foreign Minister is of course a positive factor in German-Russian relations because he is efficient, pragmatic, rational, and knows the East better than anybody else.

The key issue seems to be whether this was a success of German back-door secret diplomacy or whether Putin aptly used his German contacts to drive home yet another foreign policy PR success (after Syria, Iran, Snowden and Ukraine). True: Khodorkovsky himself thanked Genscher for his engagement; the elder statesmen said Merkel, Westerwelle, and ambassador Brandenburg were also supportive during his two-year effort. However it seems that Putin did not so much react to international pressure (let’s not forget that a third court case was being prepared including a failed interrogation of German law professor Otto Luchterhandt), but rather acted from a position of perceived strength and carefully picked the moment, the German counterparts then acted as a “midwife” in facilitating the release. Genscher approached Khodorkovsky and suggested to him to write the letter and handed it over to Putin in person, in conjunction with the Sochi momentum and the sickness of Khodorkovsky’s mother, the time for the pardon letter was ripe. Khodorkovsky was a bargaining chip, a trump card for the Russian president. Putin has been insisting that Khodorkovsky admit his guilt in the letter. Putin dropped this condition at last. As Mark Galeotti told me on Twitter, Genscher is an “old-school East/West fixer,” but we do not know what was offered in return, we can also only hypothesize who the interested parties are and what the informal deal included: Merkel going to Sochi? Trading Khodorkovsky for the Anschlag spy couple? Khodorkovsky not pressing Rosneft and Western companies that helped strip the Yukos assets? Khodorkovsky going into exile, not doing high politics in Russia? Or not pushing for a Magnitsky/Aleksanyan list in Europe? It is quite right, though, that this is also about German-Russian relations. How these will develop can, among others be deduced by the next coordinator of the cabinet for bilateral relations: Will Merkel pick Schockenhoff, or can Steinmeier push through his party comrade Erler, a notable proponent of state-centered diplomacy and appeasement? It also became evident that Germany still has some back-channels to Putin that other European states and even the USA do not possess any more. Germany should make use of them when this corresponds to German, and more importantly, EU interests…  keeping in mind, however, that this often comes with trade-offs: in transparency, conflict of interests, and legitimacy to a regime that is more and more a liability than a strategic partner. In the coalition agreement, the two governing parties committed themselves to a two-track diplomacy, both with elite state actors and broader segments of the Russian society. The latter should not be compromised due to the former. By the way, Genscher is not only a well-respected elder statesman, but also a self-interested entrepreneur who helped conduct PR campaigns for Azerbaijan, Kazakhstan, and Belarus on behalf of Consultum Communications. Will he have his Schroeder momentum?

There are just two things being confirmed so far: the former German foreign minster has been involved directly, including two meetings with Vladimir Putin, and the German Embassy in Moscow has been involved as well, particularly toward the end, providing the necessary technical assistance. As of now, it does not look like a "great game behind the curtain." While these talks took place, the Russian pressure on the Ukrainian government persisted. And there are no signs of change regarding the friendly/neutral neglect by the German side of Russian core interests. So I think the reasons for setting Khodorkovsky free have to be found elsewhere, not in Germany. 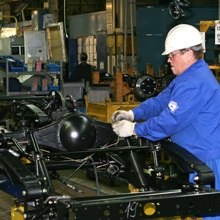