“Diversionary war” is a term used by scholars to describe an international conflict launched for domestic political reasons, rather than for real security or geopolitical motives.  War, from this perspective, can encourage people to rally around the flag, focusing popular attention on patriotism and thereby “diverting” it from political crises at home.  Scholar Jack S. Levy in an edited volume chapter argues that international conflict short of all-out war is even more likely to be used for diversionary purposes.  The notion entered popular culture with the 1997 Hollywood film “Wag the Dog”, where a fictional U.S. president launched a fake war in Albania to divert people’s attention from his own sex scandal.  The next year, critics accused President Bill Clinton of imitating the movie, when U.S. air strikes in Libya and Afghanistan followed on the heels of the Monica Lewinsky revelations.  (The bipartisan 9/11 Commission Report found no evidence to support those accusations against Clinton, nonetheless.)

The timing of Russian President Vladimir Putin’s decision to grab Crimea suggests that his motives may have had a diversionary twist.  He undoubtedly took advantage of immediate events on the ground—like the routing of the Berkut police by protesters in Kiev and the flight of Ukrainian President Victor Yanukovich—that could not have been predicted in advance.  But Putin may have been actively searching for something to take Russian minds off his own unfolding scandal when the Ukraine crisis fell into his lap.

Putin’s scandal was the corruption surrounding the Sochi Olympics.  As we all know by now, the construction costs associated with Sochi facilities and infrastructure exceeded $50 billion.  Despite official claims, it appears that most of those costs were paid by the Russian state, either directly through one budget or another, or indirectly through state-sponsored loans.  Detailed and documented accusations about massive kickbacks and bribery have been published by Russian opposition figures Boris Nemtsov and Leonid Martynyuk and Alexei Navalny. That information was long available inside Russia (and in the Russian language) to anyone who wished to see it.  The sites provide damning evidence about a number of Putin’s close associates, several of whom (like railway baron Vladimir Yakunin and Putin’s childhood judo buddy Arkady Rotenberg and his brother) are now on the U.S. sanctions list.  An international documentary film that made similar accusations, “Putin’s Games,” played to two sold-out houses at Moscow’s Khudozhestvenniy Cinema in December, despite apparent attempts by Kremlin authorities to block it.

Putin made it very clear to everyone that the Sochi games were his highest priority, so no one in a position of authority would have dared to raise the corruption issue before the Olympics were over.  But Putin has stayed in power for so long because he has been able to control the snake-pit of competing informal political networks that surround the halls of power in Russia.  At least one of those networks is filled with economic internationalists—the economists, business leaders, and trade negotiators in and around the Kremlin who understand that Russia’s economy is stagnating.  They know that corruption is to blame, and that corruption is preventing the Russian economy from undergoing the further privatization and diversification that it needs in order to thrive.

Members of that network told some Americans privately in 2013 that they believed some kind of reckoning over corruption in Sochi would happen this spring, perhaps when it became clear that tens of billions of dollars in state loans could not be repaid.  At that point Russia would have been roiled by conflict and instability among its elite power holders, as the economic internationalists took on some of Putin’s old KGB and other buddies who benefitted from Sochi.  The public might never have known or understood what was happening, but Putin would have lost face where it matters most—inside Kremlin walls, where he is supposed to be the great informal network balancer.  Putin’s Crimean adventure neatly shifted the conversation to other topics, and no one is likely to bring it up again anytime soon.

Diversion could not have been Putin’s only motive.  There are certainly deep nationalist, historical, and triumphalist reasons for Putin’s actions, as Joshua Tucker wrote about here in The Monkey Cage last week.  But it is striking how little Putin gained in Crimea.  The region was subsidized by the rest of Ukraine, and he will now have to fund those subsidies out of the Russian state budget.  Russian generators are now keeping the Crimean capital of Simferopol lit, as Ukraine turns off the electricity flowing in from the mainland.  Crimea does have a crucial Russian naval base, but Putin already controlled that base without needing to occupy Crimea, because of a treaty that lasted through 2042.

Putin may look good at the moment, as the fireworks go off and songs are sung.  But there is no question that his Crimean adventure will further dampen Russian economic growth this year and for the foreseeable future. If anything, it will also undermine Russia’s long-term security, as NATO’s attention turns back once more to the European theater.

We will not know the truth about why Putin decided to intervene in Ukraine unless or until Russian archives are opened decades from now.  Even then, in any country, it is notoriously difficult to find proof that a leader took foreign military action for domestic reasons.  It is not the kind of thing that anyone is likely to admit in writing.  But the fact that Putin’s moves in Crimea do not really further Russia’s long-term interests indicates that something else is in play.

The corruption tarnishing Putin’s Sochi dream is not in the headlines now.  But the reckoning has only been deferred.  At some point the military action will stop, and at that point the accounting will undoubtedly begin. 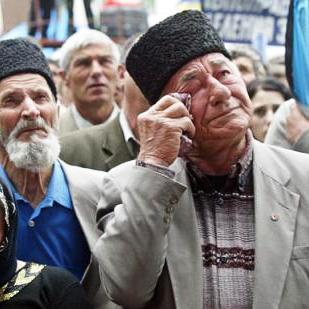