With apologies for the long delay, today I'm posting the final installment of my notes from the 2015 Moscow Conference on International Security, covering the panel on combating terrorism and extremism. Speakers included Mohamed Atmar, the National Security Advisor to the President of Afghanistan, Amb. Zamir Kabulov, the Russian special representative for Afghanistan; Maj. Gen. Walid Salman, the Chief of Staff of the Lebanese Army; General Ngoga, the head of the military police of Cameroon; and Richard Weitz, the Director of the Center for Political-Military Analyses at the Hudson Institute.

The keynote speech was delivered by Igor Sergun, the Head of the Main Intelligence Directorate (GRU) of the Russian Armed Forces. Unfortunately, the text of his speech is not available, so I all I have is my incomplete notes and photos of the slides Sergun presented. He argued that terrorism is increasing a global force that is advancing around the world. The characteristics of modern terrorism includes fanaticism and intolerance, global goals, secure financing sources, access to modern weapons and advanced technology, and close ties to criminal networks. 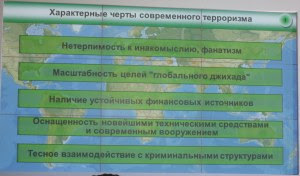 Efforts by groups such as Al-Qaeda and ISIS to restore the Great Caliphate pose a critical threat to a wide swath of the world, from Libya to Afghanistan, and especially including Iraq and Syria. 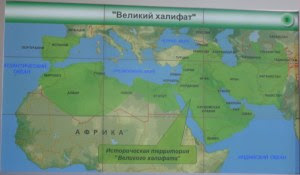 The expansion of terrorist and radical activity has claimed many lives. 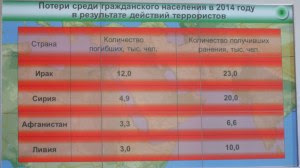 ISIS is a particularly grave threat to the region. 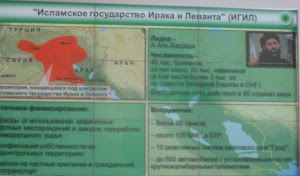 Groups such as Boko Haram, al-Shabaab, IMU, and Hizb-ut Tahrir are active on the periphery of this core region. The Taliban continues to have access to training camps in remote areas of Pakistan. Even farther away, Jamaa Islamiya poses a threat in Southeast Asia. Experienced fighters are returning to Europe and even starting to act in South America. 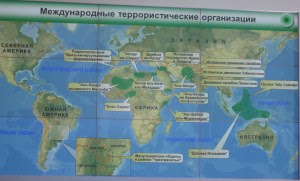 Western countries don't realize that the controlled chaos strategy they have implemented around the world has led to the growth of terrorism. US assistance to Afghan mujahedeen fighting against the Soviet Union in the 1980s led to the emergence of al-Qaeda. More recently, Western efforts to remove the Qaddafi regime in Libya have resulted in the spread of radical ideologies and Libyan weapons to groups throughout northern Africa. Similarly, US support for rebels opposing the Syrian government have directly led to the formation of ISIS and other radical groups in Syria and Iraq. US actions lead to the growth of extremism around the world. Then the US tries to mobilize the international community to stop terrorism, not recognizing that it played a key role in the origin of the threat in the first place. 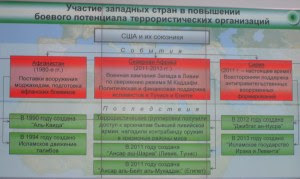 I thought it was interesting that the entire speech did not mention the threat posed by terrorists and radical Islamists to Russia itself, and specifically to the North Caucasus. In past speeches on this topic, Russian leaders always made sure to note that danger and how it tied Russia and other countries together against a common threat. Now, it almost seems like the discussion of radical Islam and terrorism is being used as a pretext to condemn Western countries (and especially the US).

This sense was highlighted for me by an intervention during the discussion after the speakers. The chair, Deputy Defense Minister Anatoly Antonov, recognized Russian Middle East expert Yevgeny Satanovsky. He called on Satanovsky in such a way as to make it appear that the intervention was pre-arranged. Satanovsky, in turn, started by arguing that it was time to stop thinking that the US is part of the solution to the problem of terrorism, and to start thinking that it is part of the problem. He noted that the US supports Saudi Arabia and Turkey, which both have supported terrorist organizations in the Middle East. He then went on to talk about the risk posed by a Central Asian Spring and the need for Russia, China and Iran to work together to guarantee Central Asian security. Support for Iran's role was also expressed by Kabulov, who argued that Iran does not export terrorism and should be included in the SCO once sanctions are lifted. Moshes: Moscow was merely attempting to minimize the effect of future scandals