(The Atlantic) (Article by Olga Khazan) (Cory Welt is quoted)  — When William Averell Harriman, who served as Secretary of Commerce under President Truman, mentioned "Soviet imperialism" in a speech in Seattle, writer Ilya Ehrenburg wasted no time airing his disgust on the pages of the Soviet publication Pravda.

American warmongers want to drop bombs on the Soviet Union because they don't like its social order, Ehrenburg wrote, but the Soviet people, though they consider U.S. laws on race to be insulting to human dignity, "do not intend on that account to turn modern weapons against Mississippi or Georgia," the Christian Science Monitor described in a 1947 story.

The exchange is indicative of a rhetorical strategy known as whataboutism, which occurs when officials implicated in wrongdoing whip out a counter-example of a similar abuse from the accusing country, with the goal of undermining the legitimacy of the criticism itself. (In Latin, this rhetorical defense is called tu quoque, or "you, too.")

More than a month after NSA leaker Edward Snowden landed in Moscow's Sheremetyevo airport, Russia has finally granted him yearlong asylum, and it seems these kinds of cold-war-era swipes are back — but in a subtler way.

There are a few likely reasons Putin chose to shelter Snowden in the end, even after going out of his way to seem reluctant. First, the Snowden saga offers an irresistible chance to poke Obama in the eye and make it seem as though Russia would never yield to U.S. pleas or threats. ("It's an easy way to look like a world leader and to prove that the U.S. doesn't always get its way," Cory Welt, a professor of Eurasian studies at George Washington University, told me.) […]

See the full article | © The Atlantic 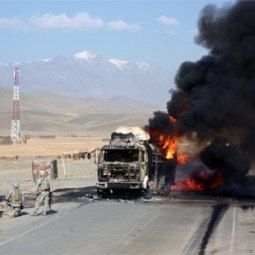 Will Afghanistan Take Central Asia Down with It?