This weekend marked the remarkable downfall of Ukrainian President Victor Yanukovych at the hands of protesters in Kiev.  It was an outcome that almost no one predicted when demonstrations began in late November against the president’s decision to reject integration with the European Union.  At the time, the democratically elected Yanukovych was among the most popular politicians in Ukraine with a parliamentary majority facing a weak and fragmented opposition.  Why did he fall and why did so few see it coming?

One important reason for the stunning collapse of Yanukovych’s regime was that he chose the wrong type of repression to suppress protests. By repeatedly engaging in extremely provocative and public displays of repression – high intensity coercion – Yanukovych simultaneously stoked protests and undermined the unity of the pro government coalition.   Yanukovych would likely have survived if he had simply sat tight and let the protests peter out.  Protesters might have remained on the square – but they would have increasingly been viewed as a small nuisance rather than a serious challenge to the President.

To understand why Yanukovych fell, we need to understand something that Yanukovych failed to grasp: the dynamics of what Steven Levitsky and I call high intensity coercion. High intensity coercion involves high-visibility acts that target large numbers of people, well-known individuals, or major institutions. Such coercion includes large scale violence such as firing on crowds, as occurred in Mexico City in 1968 and Tiananmen Square in China in 1989. This can be contrasted with low-intensity coercion. Low intensity coercion involves repressive actions that are largely out of the public eye: low-profile physical harassment, kidnapping and torture of low-level activists and supporters; the use of security forces or paramilitary thugs to vandalize opposition or independent media offices; and to harass, detain, and occasionally murder journalists and opposition activists. It also includes non-violent measures like firing opposition activists from their jobs.

Low intensity coercion is the bread and butter of almost all contemporary authoritarian regimes. Such coercion is used primarily to raise the costs of opposition and preempt serious challenges.  Low intensity coercion can also be used to discourage protest activity by raising the costs of protest and thereby encouraging people to give up.  It was the primary form of repression used by the USSR under Brezhnev (1964-1982), as well as Putin’s Russia, Singapore, and Belarus today.  High intensity coercion, by contrast, is quite rare.  It is used primarily to halt major opposition challenges, for example the use of tanks to clear protesters in Tiananmen square in China and the bombing of parliament by Yeltsin in Russia in 1993.

High intensity coercion is rare because – especially in the current era of global communications technology – it is quite risky.  It has two effects that may undermine authoritarian stability.  First, when applied sporadically or inconsistently, high intensity coercion is more likely to stimulate greater protest rather than discourage it.  Highly visible and dramatic acts of repression that are considered illegitimate heighten the populations anger at the regime and therefore encourage more protest; such repression may also function as a focal point, bringing together disparate groups opposed to the regime for various reasons.  In order for such repression to work, it must be applied consistently.

Second, high intensity coercion often undermines unity at the top.   In an era when everyone with a cellphone is a potential documentary film-maker, large scale abuse is impossible to hide, often triggering worldwide condemnation and sanctions against top elites. As a result, high intensity coercion may encourage elite defection by those who do not want to take responsibility for the regime’s illegal actions. Violent repression may also threaten the domestic legitimacy of the security forces, which, in turn, may undermine internal discipline and morale. And if the crackdown fails, top officials face prosecution or other forms of public retribution. Orders to repress protesters force coercive agents to tie themselves to the old regime in ways that put them at risk should the opposition take power.

Such risks mean that in the contemporary era, only the most cohesive authoritarian regimes have been able to carry out regular and consistent high intensity coercion without breaking at the seems.  Thus, the Assad regime in Syria, consisting basically of a single extended family, or the Mugabe regime in Zimbabwe, founded in violent revolutionary struggle, have both been able to carry out extensive repression while maintaining tight cohesion.  These regimes are cohesive because they are held together by family ties or shared history of struggle – rather than simply patronage.  (In Russia, Yeltsin’s regime was hardly cohesive; however his attack on parliament was widely supported by Western powers at the time.)

By contrast, Yanukovych’s regime was based on pure patronage.   With weak ties to Yanukovych, his supporters were only united by their desire to make money and enjoy the fruits of their corruption. These were not the kind of people willing to risk losing their vacation homes — much less going to jail — so that Yanukovych could hang on. Much better to run for the exits than risk international isolation or worse.

In a nutshell, Yanukovych fell from power in part because he failed to understand the ways in which high intensity coercion both stimulated protest and threatened cohesion within his own ranks.  First, high intensity coercion was arguably the primary factor stimulating the protests.  Thus, protests began in late November in response to Yanukovych’s decision not to sign the European Association Agreement. However, the demonstrations only became large and sustained after Nov. 30, when police violently and publicly attempted to clear the central square.   After that, surveys of protesters in December showed that the single issue that united protesters most was not the failure to join Europe (54 percent) but the police beatings on Nov. 30 (70 percent).    Such repressive measures might have worked if Yanukovych had remained firm.  But instead, Prime Minister Mykola Azarov apologized for the actions and held back. The result was the worst of both worlds for Yanukovych.  He was perceived as both abusive and weak.

By early January, protest momentum had begun to die down.  A promised infusion of Russian financial assistance in December had bolstered perceptions of Yanukovych’s strength.  At this point, many – including me – argued that Yanukovych would survive if he simply sat tight and waited the protesters out – “not giving away anything serious, and letting the protests peter out.” If Yanukovych had simply avoided provoking the protesters, they likely would have died out of their own accord or dwindled to such a small number as to be considered a minor nuisance. (Only a few – including Oxana Shevel and Taras Kuzio – predicted he would fall.)

However, Yanukovych again overplayed his hand – using his parliamentary majority to force through a series of draconian laws that appeared to forbid any form of protest.  But this again only generated even more protest as demonstrations spread to regional governments.  In mid January, Kiev saw its first serious violence.  And yet again, Yanukovych responded inconsistently.  Rather than hunkering down, Yanukovych offered a major concession in response to renewed protests by firing the loyalist Prime Minister Azarov.  But this did nothing to tamp down protests, which only became stronger. Surveys of protesters again showed that the main motivating factor for protesters was not Europe but opposition to Yanukovych’s “violent repression against protesters.”

Then on Feb. 19-20, Yanukovych made the fateful decision to do something that no leader in post-Soviet Ukraine had ever done: order security personnel to open fire on protesters in public.  On the morning of Feb. 20, snipers in broad daylight opened fire on protesters in the center of Kiev – killing significant numbers of protesters.   This action destroyed the regime in one fell swoop.  Not only did it completely isolate Yanukovych from the public at large, his own supporters began defecting in droves – including the mayor of Kiev.  At this point, Yanukovych suddenly was deprived of support and had no choice but to flee. After he left the capital, his own Party of Regions completely distanced themselves from Yanukovych – blaming the deaths entirely on the president.

In sum, the fall of Yanukovych was hardly inevitable. It may have taken patience by Yanukovych to wait out the protests (in Iran anti-government protests in 2009 took 6-7 months to completely peter out). But there is little reason to think that Yanukovych would not still be in office if he simply done nothing but wait. 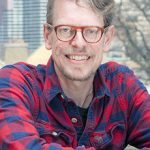 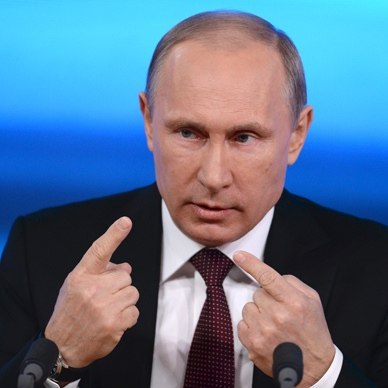 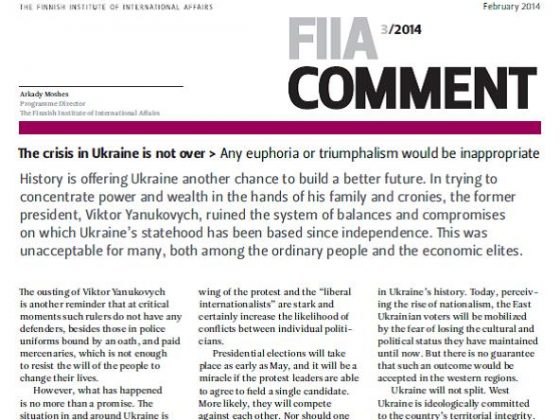 The Crisis in Ukraine is Not Over