(VOA) Russia on Wednesday suspended a three-year-old agreement with the United States on cooperation on nuclear and energy-related research — the latest move signifying a deteriorating bilateral relationship.

"It's frankly concerning," a senior U.S. official told VOA on condition he not be named.

Russian President Vladimir Putin on Monday also signed a decree suspending an agreement with the U.S. on disposing weapons-grade plutonium, citing "unfriendly actions" by Washington — a reference to U.S.-led sanctions on Moscow for its actions in Ukraine. […]

Throwing aside agreements that "are not terribly important but have symbolic value" are a way for Russia to try "to raise the cost of having bad relations with Russia," Henry Hale, George Washington University professor of political science and international affairs, told VOA. […] 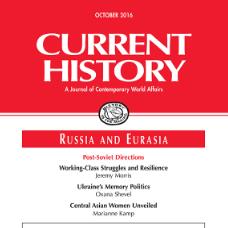 Articles by Pavel Baev and Oxana Shevel in Current History

Counter-Radicalization Policies in Central Asia: The Good, The Bad, and The Ugly